Dr. Quon and Dr Yoo provide exceptional eye care for patients of all ages. We combine personalized care, modern technology, and the years of experience to bring our clients clear vision, good eye health, and all with a smile. 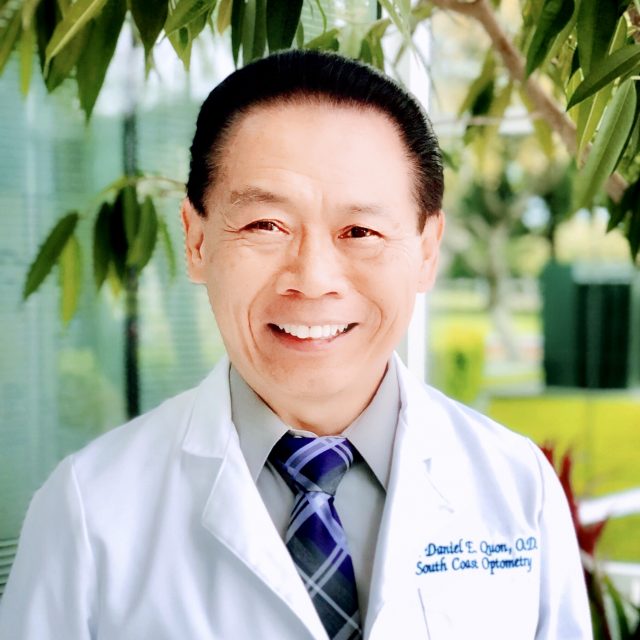 Dr. Daniel E. Quon was born in San Diego, California. However, he spent most of his life living in Los Angeles and Orange County. He earned his Doctorate of Optometry from South California College of Optometry, which is now known as Marshall B. Ketchum University. After graduating, Dr. Quon has made tremendous strides in his profession that he is wholeheartedly passionate about. He has additional certifications by the State Board of Optometry in DPAs, TPAs, Lacrimal Irrigation, Dilation, Punctal Occlusion, and Treatment & Management of Ocular Diseases (Glaucoma). He has been the recipient of numerous awards, which include: the Duffens Contact Lens Award, California Young OD of the year, 20/20’s Best and Brightest OD of the Year, Best of LA Optometrist, South Coast Plaza’s Greatest Increase in Sales Per Square Foot, Optometric Business Innovator Award by Vision Monday and Review of Optometric Business, and more! He has even been interviewed by several television networks over the years. Some interviews include: Fox 11 News (iZon Lenses), KOCE/PBS (American Health Journal on Dry Eyes & Cataract Surgery Lens Options), KCAL (Best of LA Optometrist), and KNBC (Empower Electronic Eyewear).

Dr. Quon has been in his private practice since 1979. His practice is located in Costa Mesa, CA. He continues to maintain a progressive and innovative practice that truly emphasizes patient education. In addition to his private practice, he is also currently or has been a member of numerous professional associations such as: AOA, AOA Contact Lens Section, COA, OCOS, BVI, NERF, and many others. He has been involved as a FDT Clinical Investigator for Wesley Jessen, Younger Optics, Barnes-Hind Hydrocurve, Ciba, AMO, ColorMax, and EyeBrain Medical. He has also served as the President of the Twin County Optimist Club and is currently serving on the advisory board for PEN (Primary Eyecare Network), Coastal Vision, and Percept Corporation.

In his spare time, he enjoys spending time with his family. In addition to enjoying family time, he likes to read scientific articles on health and nutrition, traveling, photography, trying new cuisines, and wine tasting. 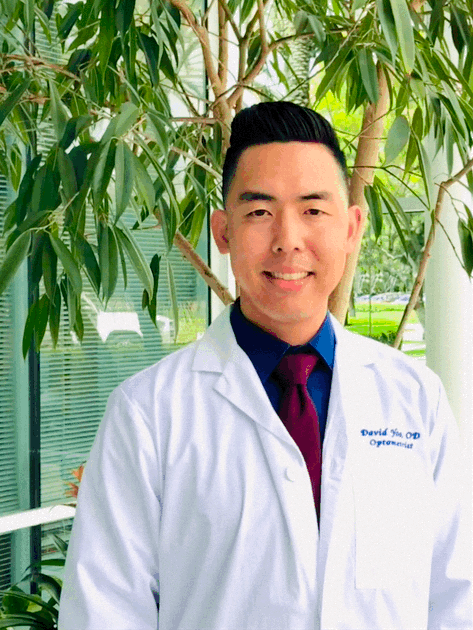 Dr. David Yoo graduated from the New England College of Optometry after receiving his Bachelor of Biological Sciences at the University of California, Irvine. After learning about specialty contact lenses, Dr. Yoo has been fascinated by them and pursued further study in this field during his time at the New England College of Optometry. He has completed numerous specialty courses and dedicated his early career learning from an expert in this field of specialty contact lenses. Witnessing the profound and positive effects these specialty contact lenses provide, Dr. Yoo has decided to commit himself to bring this technology to all who need it. Therefore, Dr. Yoo strives to provide life-changing ocular care to his community and globally so he may help those who may not have access to this service in their respective countries.

Furthermore, Dr. Yoo has completed his education in the treatment and management of glaucoma. Seeing first-hand the negative effects of this disease, Dr. Yoo strives to put his patients first by educating himself in new or more efficient methods of glaucoma detection and management.

Dr. Yoo continues his commitment to his patients by furthering his own instruction at national conferences and adding to his experience through global optometric relief missions. He has since provided his expertise in Belize, Guatemala, the Dominican Republic, and Puerto Rico

The team at South Coast Optometry aims to provide the best possible solution for the patient's eye health and vision needs. By utilizing the latest technologies and evidence-based treatments, we can ensure that each patient maintains optimal eye health.

We welcome new patients and accept most major forms of insurance.